Journalist Objects to Tendering of Audio Recordings in Court. 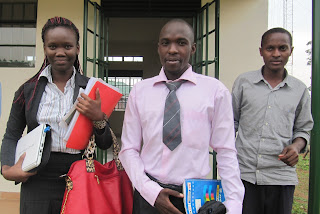 CBS radio journalist Ronald Ssembuusi (middle) leaving court with HRNJ-Uganda lawyer Catherine Anite (left).
Kalangala, 25th/October/2012; a Central Broadcasting Service (CBS) radio journalist Ronald Ssembuusi has objected to an audio recording on a CD which he said was not authentic.
Ssembuusi, through his lawyer Catherine Anite of Human Rights Network for Journalists-Uganda told court that the CD should not be tendered in as prosecution exhibit since its authenticity was questionable.  It did not bear the particulars of the alleged recording.

This transpired in  Kalangala  Magistrates Court as  prosecution produced its last witness detective ASP Emmanuel Mbonimpa attached to the police’ media crimes department at the CID head quarters who testified that on 22/November/2011, he was informed by the  former OC CID for Kalangala, Joseph Ssenabulya  of  a defamation case against Ssembuusi vide Kalangala CRB 1262/2011. He further testified that Ssenabulya wrote to the chairperson of Uganda Communications Commission (UCC) requesting for CD recordings of CBS news of 17/November/2011 on 88.8 FM. And on 08th December 2011, Mbonimpa allegedly received a phone from UCC to pick the CD.

This marked the closure of the prosecution case after producing several witnesses who among others included Daniel Kikoola- the complainant, Tindyebwa David -a fisherman and Kaweesa Gibril.

The presiding magistrate, Kenneth Gimungu adjourned the matter to 14th November 2012 to give his ruling on whether the CD recording should be tendered in court as prosecution exhibit.
Kikoola dragged Ssembuusi -a correspondent for the Buganda Kingdom’ private radio for Kalangala district in the Central Uganda region to court accusing him of defamation  when he reported a story which aired on CBS radio on 17th/November/2011 that he was being investigated for alleged involvement in the disappearance of solar panels. Over 80 solar panels were donated by the African Development Bank through the ministry of water and environment in 2010 to help circulate clean and safe water in Kalangala Town Council. But about 40 (forty) of them went missing. Since November 2011, police have recovered some of them.

HRNJ-Uganda is impressed by the expeditious way in which this matter is being handled by the Court and we hope that justice will be delivered at the end of the process.


Wakiso, 24th /October/2012; Court in Entebbe has convicted Ddungu Elias for assaulting a Vision Group journalist Rebecca Nakame and occasioning actual bodily harm to her.
While delivering his judgment, the Grade Two Magistrate Bbosa Charles said that the prosecution led by Mbaine Eunice had adduced sufficient evidence to convict the accused. Human Rights for Journalists-Uganda’s Lawyer Diana Nandudu was on watching brief.

“Therefore, considering the evidence on record, the accused was rightly placed at the scene of crime, and prosecution has proved its case beyond reasonable doubt and I accordingly convict the accused of the offence of assault occasioning actual bodily harm.”

Prosecution presented four witnesses before court.  They included complainant, Rebecca Nakame whose evidence was corroborated by that of Nakaweesi Sumaya –the second witness. The third prosecution witness was Dr. Ojara Santos, a medical doctor who carried out a medical examination on Nakame and Kato Ssempa who was declared a hostile witness and his evidence expunged from the prosecution evidence.
Ddungu was ordered to compensate Nakame with two hundred thousand Uganda shillings (UGshs.200,000/=) for the assault or face imprisonment for twelve months.

Prosecution proved that on 20th/April/2012, at Bweya village, Ssissa sub-county in Wakiso district, Ddungu together with Katongole Issa, 26 and Mutagubya Jamil, 38 assaulted the government-owned television journalist occasioning actual bodily harm contrary to section 236 of The Penal Code Act and destroyed her property –a video camera which they also confiscated. Court ordered for the arrest of Katongole and Mutagubya who are still on the run.

HRNJ-Uganda welcomes this historical judgment and commends court and the State for handling the matter expeditiously. In the same vein, we call upon the police to investigate other cases of violence against the over 200 victim journalists since 2009 and bring the perpetrators to book.

Posted by HRNJ-Uganda at 5:12 PM No comments:

Posted by HRNJ-Uganda at 1:27 PM No comments:

Kampala, 05th/October/2012; the commandant of  Kampala Metropolitan Police, Andrew Felix Kaweesi has said that the three journalists assaulted by the police were to blame, accusing them of out stepping their boundaries at the Central Police Station (CPS).
He told Human Rights Network for Journalists- Uganda (HRNJ-Uganda) at CPS in Kampala that it was wrong for the journalists to approach the police station as though it was an ordinary place. He said the police cannot investigate the matter since the journalists have declined to deposit their damaged cameras with police.
“This is a security installation where people cannot just enter as they wish. They have to follow certain rules. There must be standard operating procedures. We shall not allow people to jus come in here as if it is their home. Those journalists went beyond where they had to stop. When I told officers o take their statements, the journalists refused to hand over their damaged cameras, so we cannot proceed with any case against the officers.” Kaweesi told HRNJ-Uganda.
Kaweesi however did not quote any of the standard operating procedures, but only said that the police was in the process of coming up with such procedures. He accused the victim journalists of being opposition sympathizers. The Inspector General of Police, Lt. Gen. Kale Kayihura has severally accused members of the media of being embedded to the opposition.
“Tell those journalists to stop being opposition activists under the guise of journalism. Advise them. We shall not allow them….” He told HRNJ-Uganda.
HRNJ-Uganda reported that two journalists; Isaac Kasamani a photo journalist with the Daily Monitor and William Ntege a.k.a  Kyuumakyayeesu of WBS Television had been assaulted by the police at CPS. HRNJ-Uganda has further established that another journalist, Nicholas Mwesigye of the Red Pepper was boxed in the chest and pushed by the police.
“I had a pen and notebook with my Press card displayed in my chest. I was taking down notes when the police started chasing us away, and in the process a policeman in police uniform boxed me in the chest. When I demanded for an explanation, he reacted by pushing me and threatened that he could even beat me more. The tempers were rising but Kaweesi came in and prevailed over his men by saying that he had only told them to stop us from entering but not beating us.” Mwesigye told HRNJ-Uganda.
Mwesigye, just like Ntege and Kasamani, was not allowed to enter CPS to open up an assault case file immediately after the assault.
“The manner in which the police have decided to handle journalists is unacceptable. If the State or police is aggrieved by the work of journalists, it should work within the ambits of the law instead of resorting to illegal, highhanded, arbitrary and such unconstitutional means of assaulting journalists. The police should desist from criminalizing the work of the media to the extent of turning against individual journalists. Police should observe the law to its fullest extent.” Said the HRNJ-Uganda National Coordinator Wokulira Ssebaggala

Posted by HRNJ-Uganda at 4:49 PM No comments:

Kampala, 04th/October/2012; the police have assaulted and shuttered cameras of two journalists as they covered the arrest of the opposition leader Dr. Kizza Besigye in Kampala
Daily Monitor’s photojournalist Isaac Kasamani told Human Rights Network for Journalists-Uganda (HRNJ-Uganda) that he was slapped by one policeman while another held him by the neck from behind and pulled him down, damaging his photo camera.

“I was taking photos of Dr. Besigye as they brought him to CPS when a police officer in a blue uniform stood in front of me to obstruct me and ordered me to stop taking photos. As I pleaded, he slapped me hard on the left cheek with his right hand. As I protected my camera, another officer standing behind me grabbed my neck from behind and pulled me down. I fell and hurt my right elbow. My camera was shuttered beyond repair. I was also blocked from entering CPS to register a case of assault” Said Kasamani

Kasamani earlier reportedly survived a bullet allegedly aimed at him by police while covering walk to work demonstrations early this year. Police instituted an investigation which ruled out any possible shooting.
Another victim journalist, William Ntege a.k.a Kyuumakyayeesu told HRNJ-Uganda that he was pushed down the stairs of Central Police Station. He rolled down hurting his right leg and in the process his video camera was also shuttered.

Ntege told HRNJ-Uganda that he was filming Besigye’s arrest at CPS when he was pushed down the stairs.
“A police man ordered me to leave the place, but as I was explaining to him, another emerged and pushed me and I rolled down the stairs. My video camera was damaged beyond repair in the process. When I went to file a case at the same station, the officers turned me away saying I should return the next day. I cannot recognize the police officers since they had covered their heads.” He told HRNJ-Uganda.
Ntege was recently compensated for his two cameras damaged by the police as he covered opposition related stories. Ironically, the police destroyed the very camera which they compensated him for recently.
When contacted, the police deputy spokesperson, Vincent Ssekatte told HRNJ-Uganda that he did not have the facts yet.

“This is a total violation of media rights and freedom. These habitual acts of violence on media practitioners by the police are a clear indication that impunity is on the rise in this country. This incident must be investigated and the perpetrators brought to book.” said HRNJ-Uganda Programmes Coordinator Geoffrey Wokulira Ssebaggala.

Posted by HRNJ-Uganda at 4:05 PM No comments: