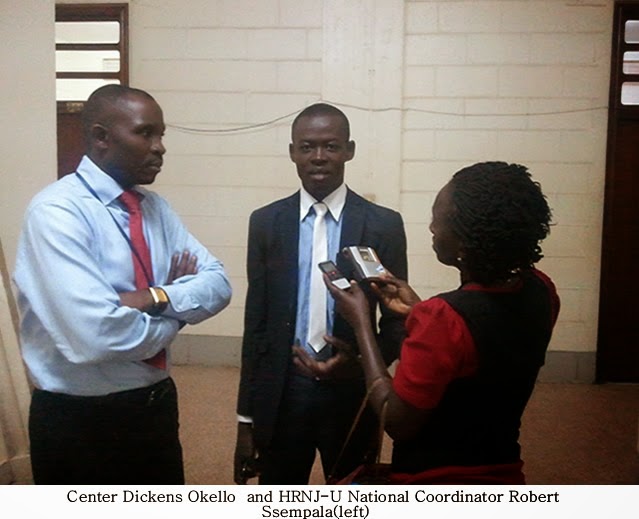 Kampala, 27th/August/2014; a Parliamentary reporter for Voice of Lango radio in Northern Uganda and Chimps Reports, an online publication, Dickens Okello has been quizzed by the police for about an hour over an alleged defamation case filed by the Aruu County Member of Parliament, Odonga Otto arising from a Facebook post.

On August 11th,2014, Dickens posted on his facebook page what Otto says implicated him as a beneficiary of an alleged financial help extended by the president to Members of Parliament to help them settle their outstanding debts. “2 weeks ago, a friend notified me that my bro Odonga Otto was seen twice in room 13 Boman house (MP Kiwanda’s office) together with Eastern Youth MP Peter Ogwang. I rushed there and found the trio.  When it happened three times I said to myself that my bro was defecting to NRM (Ruling party) but my simple follow up realized nothing near to that. Three more opposition members visited the same office according to my sources. Days later, Wafula Oguttu (Leader of Opposition) addressed the press saying 18 of his members are alleged to have picked some monies. Is room 13 the magic code???...” read the post.

In response, Otto described the post as foolish. “Foolish comment, how I wish u knew what am going thru financially Dickens Okello Honetstraw. I will request sergeant at arms and commission to get you out of Parliament fake journalist. And this time I will sue for defamation you and all those on fb being casual with people’s life. One week, expect court papers” read the Member of Parliament’s response.

Dickens this afternoon recorded a statement before Micheal Makhoha, the OC CID Parliament, where he denied the allegations. Makhoha told HRNJ-Uganda that investigations are still ongoing.
Dickens told HRNJ-Uganda that Otto threatened him with violence. In 2012, Otto was reported to have drawn his gun at Stanley Ndawula, a Red Pepper journalist over what he termed as a controversial story against him.
We implore the Speaker of Parliam
ent and the Police to ensure and guarantee the safety and security of journalists operating within the precincts of the August House, said Robert Ssempala, the National Coordinator, HRNJ-Uganda.

Posted by HRNJ-Uganda at 8:16 PM No comments: 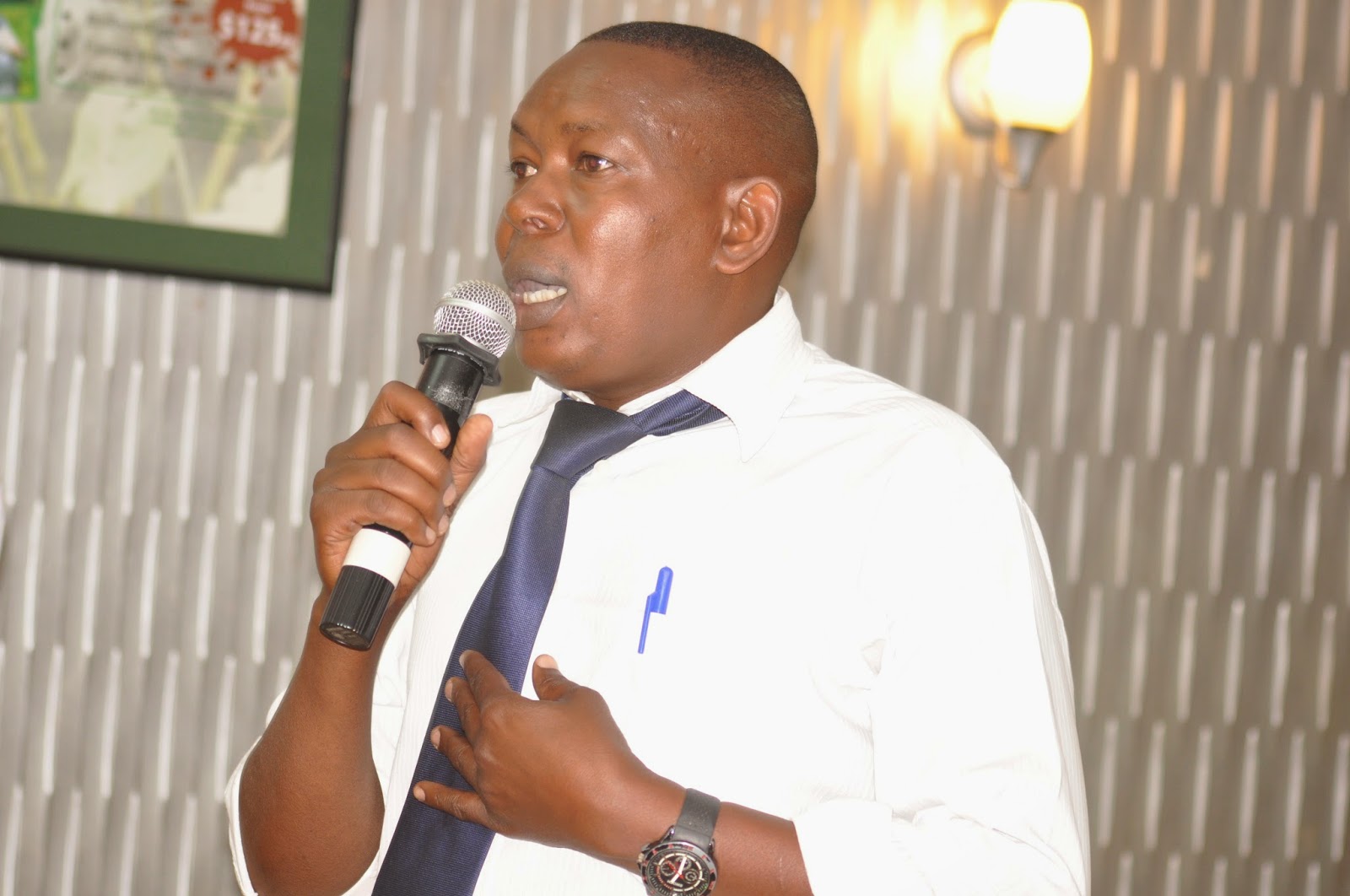 Kampala, 21st/August/2014; Hearing of a complaint in which, Gideon Tugume, a journalist formerly working with Capital Radio, accuses the Uganda Police Force of shooting and causing grave injuries to him while covering the return of Dr Kiiza Besigye from Nairobi in May 2011 has kicked off Thursday August 21, at the Uganda Human Rights Commission Tribunal with the victim implicating the police chief’s body guard in the shooting.
Appearing before Commissioner Violet Akurut Adowe, at Ntinda, Tugume recounted that on that day, while covering the said events at Kibuye round about, he was shot by one of the Inspector General of Police, Gen Kale Kayihura’s body guards at around 2pm.
“I raised my hands up saying please don’t shoot I am a journalist. Before I completed my sentence, I felt a sharp pain on my right knee before suddenly falling down,” Tugume told the Tribunal, adding that he was wearing a press jacket, an identification press tag and held his audio recorder. He said after the shooting he was rushed to Mulago hospital by a police ambulance where he spent a night before being transferred to AAR Health Services in Kololo.
Tugume further told the Tribunal that a few months later after the shooting, Capital Radio his employer then terminated his services for continuous absence from duty due to the injuries sustained and has since remained jobless.
Another witness, Lubwama Kajoba, who was also covering the events, testified before the Tribunal that he saw a “uniformed police officer shooting at Tugume at Kibuye round about”.
In 2011, Tugume through Human Rights Network for Journalists-Uganda (HRNJ-Uganda) filed a complaint before the Uganda Human Rights Commission alleging a violation of his right to protection from torture, cruel, inhuman and degrading treatment contrary to Article 24 of the Constitution of the Republic of Uganda. Tugume seeks compensation and protection from further harassment by the Police force.
HRNJ-Uganda legal officer, Catherine Anite is Counsel for the complainant while Richard Adrole is representing the Attorney General. The matter was adjourned to September 18th 2014 for further hearing.
“HRNJ-Uganda is hopeful that justice will prevail. This matter has dragged, so we implore the Uganda Human Rights Commission to expeditiously hear and determine this and other complaints on infringement of media rights filed by journalists years back.” said Robert Ssempala, the HRNJ-Uganda National Coordinator.


Kampala, 20th/August/2014; Police in Uganda’s Capital Kampala have on 20th August, arrested two businessmen on charges of assaulting three journalists who were on duty on Monday 18th/Aug/2014 within the City Centre. The two, Ssembatya Edward and Mubiru Ibrahim are being detained at the Kikuubo police post.

Journalists; Ronald Bukenya working with Joy FM radio, Zimula Joel working with Baba FM radio and Aminah Nalule working with Galaxy radio accuse the duo together with six others still at large of violently assaulting them. Another businessman, one Ssebandeke Joseph also accuses them of assault.
The journalists were covering a protest by some traders in Kampala over what they termed as exorbitant rent dues coupled with poor sanitation among others imposed by the owners of some three commercial buildings in Kampala from where they work. Police fired teargas to subdue the angry mob.

The victim journalists told Human Rights Network for Journalists-Uganda (HRNJ-Uganda) that they were hit using a tripod stand by the arrested suspects together with others at large. “I told him I was a journalist and showed him my press card, but he said he did not care. He hit me around the chest using a tripod stand, I started bleeding and my blouse got soaked in blood. I later bought another one to put on before I left the city.” Amina narrated. “He tried to hit me on the neck with a tripod stand but I moved fast and he hit my right hand which was holding an audio recorder. In the process I lost my recorder.” Zimula told HRNJ-Uganda at the police in Kampala. Bukenya said he was “hit with a tripod stand around the right ribs which injured him and sought for medication.”

The trader, Ssebandeke told HRNJ-Uganda that he was unconscious for almost two days after the brutal assault. He sustained bruises all over his body. He said he was on his own business when he was attacked by the arrested suspects together with others still at large.

The Officer-in-Charge of Kikuubo police post, ASP Godfrey Abigaba told HRNJ-Uganda that the police would arrest all the suspects and pursue justice for the journalists. “We are more disappointed than even the victim journalists who were doing their work; they had their press cards but attacked by these hooligans. These suspects were on the run but we will arrest them all, so far two are in, but we will have them all. We have opened three files of assault of journalists and a businessman. The law must take its course.

“We commend the Kikuubo police for acting fast to arrest the suspects. We hope that those still at large will also be apprehended to face justice. The police must always ensure the safety of journalists when they are on duty especially under such chaotic situations.” Said the HRNJ-Uganda National Coordinator, Robert Ssempala.